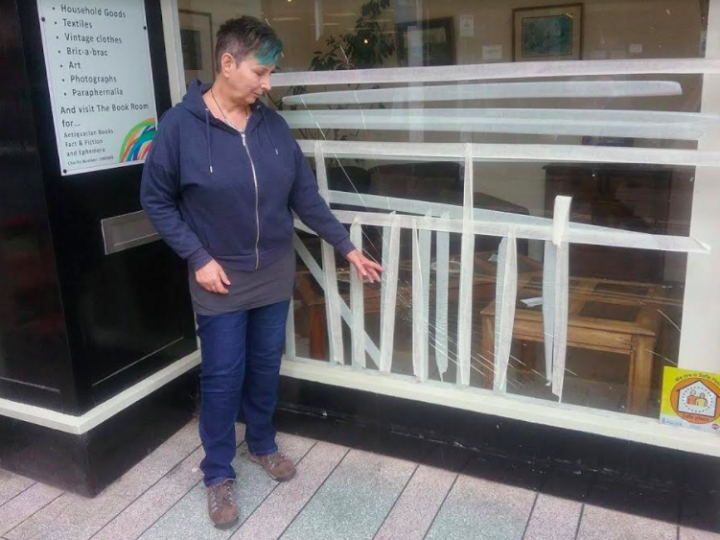 A Shropshire charity has issued an appeal for help after vandals smashed their shop windows, causing damage estimated at £2,000.

Renaissance, in Tower Street, Ludlow, is part of The Furniture Scheme charity and was targeted along with other businesses in the area during the vandalism spree. The damage to Renaissance means the whole shop frontage will have to be replaced.

Renaissance retail manager Julie Nash said the attack happened on the night of Wednesday, May 24 – the night of the Europa League final between Ajax and Manchester United.

“The game was being shown in the pubs and afterwards loads of people much the worse for drink hit the streets and that was when the damage was done,” she said.

“A number of shops were targeted. Our windows were smashed but the door wasn’t touched so it wasn’t an attempted break-in – it was just a case of deliberate vandalism. They also badly damaged our wrought iron gates.

“One of the shops captured one of the attackers on their premises on CCTV and that led to that person coming forward and admitting the vandalism. We think it was probably the same person or part of that gang that caused our damage as well. The police are looking into it.

“There was all sorts of trouble that night. There were some tourists staying next door and the noise, shouting and windows smashing was apparently quite terrifying.

“The upshot of all this is it is going to cost us about £2,000 to repair the damage and as a charity it is something we could well do without. The income we generate from

Renaissance helps us to provide our much needed services, so this is a major blow. The whole shop frontage will have to be replaced.

“There are lots of people who support what we do in south Shropshire, helping those in need – which is what The Furniture Scheme was set up to do.

“We would be very interested to hear from anyone who may have information about who was responsible for causing the damage. We would also like to hear from anyone who may be able to help us by either making a donation towards the repair.”
Julie said there had been a number of problems with vandalism and other anti-social behaviour in Ludlow – culminating in a number of break-ins last year.

“It’s not as bad as it has been but the problem we have is there is no police presence here at night and very little in the daytime,” she added.

“Locals know that and we went through a spell in the town of people openly carrying ladders and other items to break into places. I am sure a police presence has to be a deterrent.”

If anyone can offer any help with repairing the damage to the shop, they are asked to telephone Julie on (01584) 877751, or call into Renaissance in Tower Street. Anyone with information on who caused the damage should call police on 101.